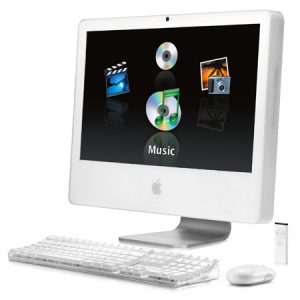 I love old computers and it pains me to get rid of them especially if there is nothing wrong with them (other than age). However, so much of what we do today with our computers is on the internet and if a computer cannot reasonable connect it isn’t much good to most people.

The 2006 20″ iMac (2GB of RAM, Intel Core 2 T7400, and 320GB 7200RPM hard drive) I have falls into that category. It is still a good computer but the latest version of OS X that it will run is 10.7.5 (Lion) which is about 7 years old now. Although functional, the Safari browser is outdated. A newer version of Chrome can be installed but it will constantly remind me that it is no longer supported under the old version of OS X.

After some searching I found a solution. I downloaded a modified version of Ubuntu Linux from the link below.

After burning it to a DVD I installed it on the 2006 iMac. At first I tried using the Bluetooth keyboard that came with the computer but it isn’t active while booting up so pressing “c” to boot from the CD/DVD would not work. Connecting a USB keyboard and mouse got around that issue. While it installed, I had some issues before the installation. First, after booting the Live DVD it would not recognize the Airport adapter to connect to WiFi. I used a USB WiFi adapter and that connected to the internet right away. Then I told Ubuntu to install wiping away the old Mac OS X, install 3rd party drivers, and install updates from the internet. It installed without a problem.

When it restarted it had a problem on the login screen. I could not read the login screen because of some garbled graphics even though the mouse pointer was fine. However, all I had to do was press Enter then type in the password I created and I was soon at the desktop. Another bonus was after installing Ubuntu on the hard drive, along with the 3rd party drivers, was that the Airport adapter started working so I did not need the USB WiFi adapter.

To fix the the login screen garbled graphics I used the following commands from a Terminal window (you can do this by pressing Ctrl-Alt-t or finding it in the Ubuntu menu). This was found on the Ubuntu forums (https://ubuntuforums.org/showthread.php?t=2391462).

After rebooting it worked perfectly.

After all this I was pleasantly surprised by the results. I can browse the web with the latest version of Firefox and watch YouTube videos in a window at full speed (full screen videos were a little choppy but still viewable). I also composed this post. While it works well, it is still an old computer so to get the most out of Firefox, click the three bars in the upper right to open the menu and choose Add-ons. Search for ad blocking add-ons such as Ghostery and Adblock Plus. It will greatly speed up your browsing by preventing most of the advertising garbage to load and slow things down.

Ubuntu also comes with Office software so I can compose documents in LibreOffice Writer and play a number of fun games. All of these programs and many more come preloaded on the Ubuntu Linux DVD and are installed by default.

If you hate throwing away perfectly good gadgets, hopefully you can find alternative uses for them. But if not, be sure to recycle them. ♦